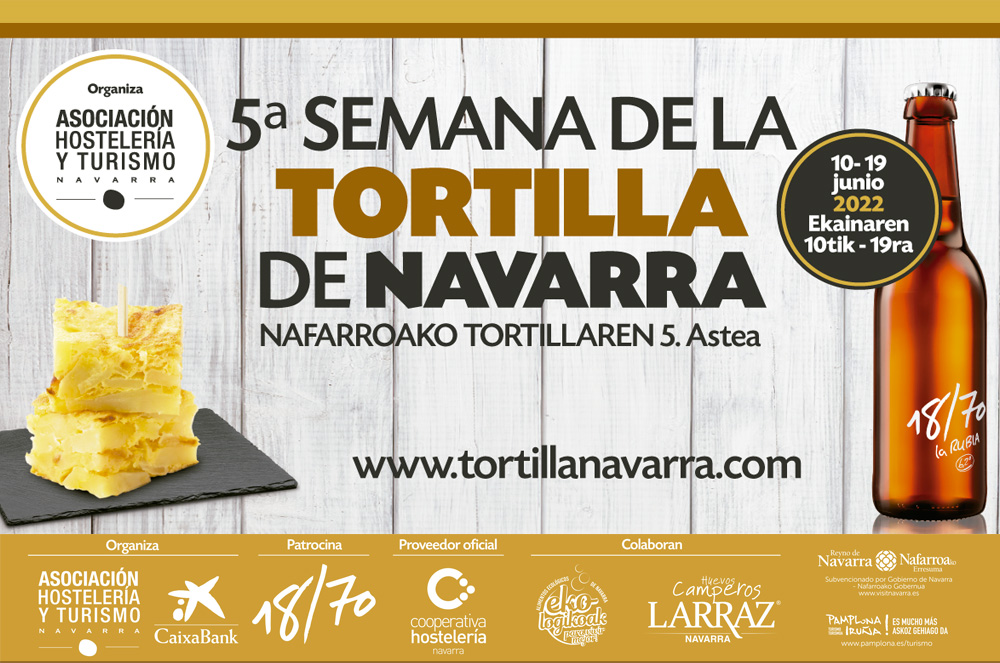 Navarra Tortilla Week is organized by the Navarra Hospitality and Tourism Association (AEHN) in collaboration with CaixaBank, Heinneken, the Hospitality Cooperative as official supplier and CPAEN. In addition, it has the collaboration of the Department of Tourism of the Government of Navarra and the Pamplona City Council.

The event will be held from June 10 to 19, 2022, in which a total of 27 establishments will participate, who will offer the public one or two tortilla options, with which they will later present themselves (if they wish) to the “Contest of Tortillas”:

The Hospitality Association has published displays, flyers and posters listing the establishments and their address, so that those who go to taste the pinchos can create their own routes. They will be distributed in all participating establishments, shops and tourist offices.

The participating establishments, distributed throughout Navarra, are from the following towns: Pamplona, Ayegui, Berriozar, Cizur Menor, Larraga and Tudela.

As in the previous edition, the website www.tortillanavarra.com has the information of the participants, the tortilla pinchos and the location of the establishment.

On the other hand, from the social networks everything that happens about the Navarre Tortilla Week (news, anecdotes, photos of the participating skewers) is energized and communicated and you can follow the news with the hashtag #TortillaNavarra2022 on the pages of :

Once the Navarra Tortilla Week event is over, the election of the WINNING TORTILLAS will take place in the final to be held at the headquarters of the Hospitality Cooperative on Wednesday, June 22, 2022.

All the establishments that wish to participate in the categories in which they have chosen to participate will compete. The tortillas will be tasted by a jury made up of professional chefs who will decide the winners that same day. The jury assesses them according to: presence/aspect, cooking point, aroma, texture, flavour.

Photography Prize on Instagram- Heineken will award a gift to the user who has shared the most original photograph on Instagram.

As in previous editions, a photography contest will be held on Instagram open to the public, in which users can participate by uploading the photos they take from Friday June 10 to Sunday June 19 (both inclusive). . The most original photo will be awarded by a jury.

The requirements to participate are:

• Omelette with bacon and caramelized onion

• Tortilla with txistorra and chilli pepper

Association of Hospitality and Tourism of Navarra
View Organizer Website